STORMWATER AND ITS EFFECTS ON OUR WATER SYSTEMS

STORMWATER AND ITS EFFECTS ON OUR WATER SYSTEMS
When rain or other forms of precipitation fall to the earth in undeveloped areas, it typically soaks into the ground and/or is soaked up by surrounding vegetation. Any water that drains into nearby water systems is of good quality and does not have as many negative effects on the environment. However, this is a different story in urban areas, where most surface types are impervious (does not allow water to pass through). This includes parking lots, roofs, and some soils in developed areas due to compaction. This change in the surface type from pervious to impervious has negative effects on water systems, which are very dependent on their respective watersheds. Watersheds are drainage basins or any area where precipitation collects and drains off into a common outlet (any other body of water). Water that flows overland in urban areas is called stormwater. 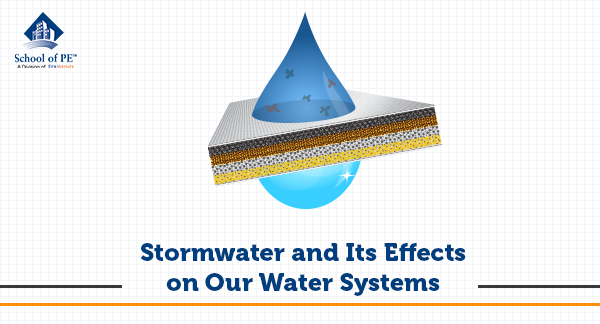 Stormwater is precipitation that flows over the ground in developed areas. This water flows over roadways, parking lots, and rooftops carrying oil, grease, and many other pollutants with it. Stormwater ultimately discharges into sewer systems and/or waterbodies causing water quality issues and negative effects to the ecosystem. Stormwater runoff contains pollutants such as fertilizer, which contains both nitrogen and phosphorus. These two are naturally present in everything, but this excess along with high velocity rainwater endangers the environment.
Stormwater velocities can be high and are expected to become higher due to the effects of climate change. Climate change causes an increase in the severity and frequency of major storm events, which mean a significant risk for flooding. Frequent flooding destroys aquatic habitats and displaces many species from their natural environment. Flooding also causes water in sewer systems to overflow carrying pathogens, excess nutrients, heavy metals, and other toxins. This is a threat to the public health and environment. These pathogens can also be carried to drinking water supplies and swimming areas, causing a myriad of disease-causing microorganisms. Toxins in stormwater also cause an increase in algal blooms that suffocate and kill aquatic life. Stormwater causes a decrease in stream base flows; natural flow characteristics have changed due to urbanization. Also, water is not supplied to underground aquifers. Having impervious surfaces means that water can no longer infiltrate into the ground and recharge the groundwater supply.
Traditionally, water infrastructure such as storm drains and culverts are used to receive, convey, and discharge stormwater through a series of pipes into receiving water. Now, green infrastructure is becoming a more common practice of treating stormwater, which is more beneficial to the environment and the economy. Green infrastructure includes methods that capture rainwater, treat it, and discharge it at lower rates. This is accomplished with more natural stormwater management practices, including permeable pavement, green roofs, and rain gardens. Green infrastructure uses soil and vegetation to mimic the natural hydrologic process through infiltration and evapotranspiration. The goal of green infrastructure is to preserve natural features and minimize impervious surfaces.
References:
By developer|2020-06-24T07:02:08+00:00June 24th, 2020|Uncategorized|